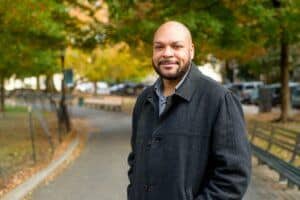 Karim Camara is a Spiritual Teacher, Author, Speaker and Coach dedicated to helping individuals and organizations discover their purpose and reach their potential. He currently serves as Pastor of Abundant Life Church, Brooklyn, New York and also as a high-ranking New York State government official, as the Executive Director of the Governor’s Office of Faith-Based Community Development Services.

In addition to serving as a Pastor and government official, he is the Chief Executive Officer and founder of Camara Strategies International (a Brooklyn-based personal and organizational development company, which includes Coaching, Motivational Speaking, Team Training, Strategic Planning, and other services). He is a John Maxwell Certified Coach, Speaker, and Trainer. With over twenty- years of experience in human development, Karim Camara is passionate about helping individuals and organizations reach their highest potential. Karim and his endeavors  have been seen on major, nationally known news outlets.

Karim is a former politician, who served in the New York State Legislature from 2005-2015 as a “Member of the Assembly”, representing the 43rd District which covers parts of Brooklyn. From 2012-2015 he served as the Chair of the New York State Black, Puerto Rican, Latino and Asian Legislative Caucus, which is the largest of its kind in the country. He was also the New York State Faith Director for the then-Senator Barack Obama’s historic campaign for president.

On February 20, 2015, he was appointed by Governor Andrew M. Cuomo (New York) as Executive Director of the newly created Governor’s Office of Faith-Based Community Development Services.

His many interests include coaching youth basketball (his team won the Amateur Athletic Union (AAU), 2018 New York State Championship for 11 and Under Division), dog training and spending quality time with friends and family.

Camara graduated from Xavier University of Louisiana with a Bachelor of Arts in English Literature (Minor: Chemistry). As a student at Xavier University, he was also very active in community service. Camara was a leader in the nationally recognized community service organization M.A.X. (Mobilization at Xavier). As part of this organization, he started and led a program called Project R.I.S.E. (Reducing Illiteracy Scars through Education), a literacy program at a New Orleans public school with some of the lowest reading scores in the city. Due to the success of this program, Camara was invited to stand with President Bill Clinton at the news conference to announce, AmeriCorps, the President’s new National Community Service Program.

Before his election to the Assembly, Camara was the Director of Institutional Advancement for the Cush Campus Schools, a pre-K through 8th-grade independent school, located in Crown Heights. He has also worked with the American Red Cross of Greater New York in their Emergency Family Center, a transitional housing shelter for displaced and abused women. Camara also participated in the National Capital Seminarians for a semester-long program where he studied Legislation and Ethics at Wesley Theological Seminary’s D.C. campus, worked with the Children’s Defense Fund, and worked as a Congressional Intern for former Congressman Major R. Owens (D-NY). He has also served on the Community Advisory Board of the State University of New York Downstate Medical Center, as the Faith Leader Advisory Committee of New Visions for Public Schools and on the Board of Managers of the Bedford YMCA.

Camara and his wife, Orelia Merchant Camara, are the proud parents of two children.